On Thursday September 6th and Friday September 7th, great success with the public and visitors during the evening visits to the exhibition ROSALIA eris in peste patrona, at the Royal Gardens and for the video mapping projected on the main facade of the Monumental Complex.

In two days between 9 p.m. and 12 a.m. more than 10 thousand people attended the spectacular videomapping on the facade of the Royal Palace, based on the history of the Palace and the life of Rosalia who lived here, and have visited the exhibition Rosalia eris in peste patrona and the Royal Gardens at reduced cost of 3 euros. 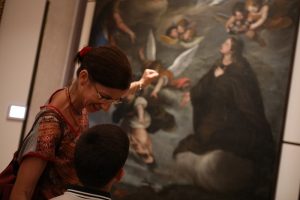 The two appointments, promoted by the Sicilian Regional Assembly and the Federico II Foundation, were a way to celebrate with tourists and citizens the opening of the new tourist route with entrance from the Monumental Gate of Piazza del Parlamento, which sparked interest and curiosity. With the new tourist route it is possible to admire places long hidden from the public, with historical and archaeological elements of considerable importance. A striking reopening of the section walled around 1930, starting today allows visitors direct transit from the new entrance to the Maqueda Courtyard.

It will also be possible to access through a corridor the Duke of Montalto Halls, above the Punic wall system of about 2500 years ago, originally intended for ammunition storage, then turned into rooms for Parliament summer hearings and finally into stables during the Bourbon phase. Today the rooms wanted by the President of the Kingdom Don Luigi Moncada, Duke of Montalto, are returned to the public with a renewed exhibition and lighting system, guaranteeing an evocative access to the art exhibitions organized by the Federico II Foundation.

The bookshop is new as well, located in the first room that reveals itself at the opening of the Monumental Gate. A large space with an area for small events and book presentations, but above all the fresco of the “Madonna del Rosario con San Domenico” by Giuseppe Spadafora Junior. After careful and careful recovery it has been detached and repositioned.

The Videomapping, on the other hand, edited by and executed by OddaAgency, was entitled AL-QASR. It is the Latin castrum, the Byzantine kastron, the Arabic al-qasr, the Spanish alcázar, today’s Cassaro. For centuries a single word has been designating the Royal Palace of Palermo and the main street of the city, and yet for too long the palace had its back to the Cassaro. The new entrance, with an equally new bookshop, in fact, has also sparked curiosity and interest. The animated tale on the Renaissance façade of the building tells the history of the castle, the Phoenician colonization and the open doors on the Arab Galca, the Norman fortification and the triumph of the mosaics and the Arab-Norman architecture, moments of ruin and baroque splendor . 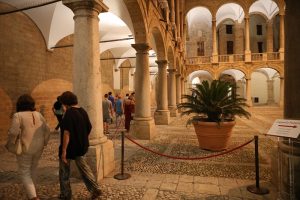 From 9 p.m. and 12 a.m. during the two days it was possible to watch the videomapping for free and visit the ROSALIA eris in peste patrona exhibit and the Royal Gardens of the Monumental Complex at only € 3. The exhibition, inaugurated last September 4th with a performance by Salvo Piparo and Costanza Licata, tells, for the first time, through ancient documents and masterpieces by Van Dyck, Preti, Novelli and many others, the true story of Rosalia de’ Sinibaldi, who saved Palermo from the plague of 1624 and became its undisputed patron saint.