Royal Palace, from this morning the ticket office, the new entrance and the new route open to the public. The inauguration last night with the show by Salvo Piparo and Costanza Licata. Crying “Let’s stay human” and a stage became for the occasion a metaphorical pier, the actor has invited viewers to enter from the new entrance of the Palace, a Unesco heritage site, and bring Saint Rosalia back in what was her first home.

Tomorrow September 6th  and Friday 7th the exhibition ROSALIA eris in peste patrona and the Royal Gardens at a cost of 3 euros.

Palermo September 5th. This morning, at 8.15 am, for the first tourists arrived at the Royal Palace to visit the monumental complex were amazed at accessing the site from the new entrance: the Monumental Gate of Piazza del Parlamento. The new ticket office, as well as the new entrance, are now, in fact, right on the main facade of the building; at Piazza del Parlamento in what was originally the only access to the historic Palace. 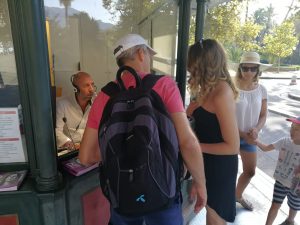 The new tourist route allows you to admire places long hidden from the public, with historical and archaeological elements of considerable importance. A striking reopening of the section walled around 1930 allows visitors, from today, to directly transit from the new entrance to the Maqueda Courtyard. It will also be possible to access, through a corridor, directly to the Duke of Montalto Halls, above the Punic wall system of about 2500 years ago, originally intended for ammunition storage, then turned into rooms for Parliament summer hearings and finally into stables during the Bourbon phase. Today the rooms created by the President of the Kingdom Don Luigi Moncada, Duke of Montalto, are returned to the public with a renewed exhibition and lighting system, guaranteeing an evocative access to the art exhibitions organized by the Federico II Foundation. The bookshop is also new, located right in the first room that reveals itself at the opening of the Monumental Gate. A large space with an area for small events and book presentations, but above all the fresco of the “Madonna del Rosario con San Domenico” by Giuseppe Spadafora Junior. After careful recovery it has been detached and repositioned. The new entrance and the new tourist route of Royal Palace were inaugurated with a grandiose event just last night, at the conclusion of the inauguration of the exhibition ROSALIA eris in peste patrona (the exhibition dedicated to art and the cult of the Patron Saint of Palermo) with the show of Salvo Piparo and Costanza Licata. With the cry of “R as remain human”, the Palermo actor invited the audience to get on stage that he reclaim as “pier”. A metaphor of solidarity and brotherhood, feelings which, first of all, the Sicilians should acquire again according to Piparo because Sicily and its ports have always been an expression of welcome. A clear message to the recent actions of the Government and the story of the immigrants left for days on the ship Diciotti at the dock of Catania. So, once all gathered on stage, the storytellers invited guests to access the new entrance of the Royal Palace to accompany, even here symbolically and metaphorically, Saint Rosalia (represented by a faithful reproduction of the oldest votive shrine dedicated to her and commissioned by the Federico II Foundation). A triumphal entrance that returns the “Santuzza” (little saint) in the Palace that was her first home. From today Palermo regains its Palace, which for years “has turned its back” to the Cassaro, today part of the Unesco Heritage, of which the Royal Palace is increasingly a protagonist. 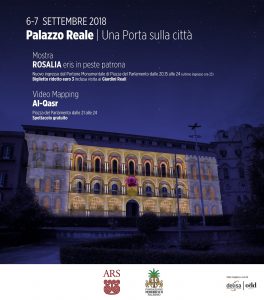 Moreover, to promote the new access to the Palace and the new tourist route, the Federico II Foundation, not satisfied with the full calendar of events of the recent months, has organized for two evenings tomorrow September 6th and Friday 7th from 8.15 p.m. to 12 a.m. (last admission at 11.00 p.m.) to visit the exhibition ROSALIA eris in peste patrona and the Royal Gardens at a cost of 3 euros. In the same two evenings you can also attend the free video mapping Al – Qasr projected on the Renaissance façade of Royal Palace. A story that tells the relationship between the Palace, the city and Saint Rosalia.